Why are diesel engines so common today? The answer to this question is simple – They are more efficient and less expensive than their counterparts. So, is it just as simple as choosing a diesel engine for your vehicle? No, actually. There are different types of diesel engines in the market today, making it important that you under the differences and choose the best according to your needs.

In this article, we shall discuss three engines: Power Stroke, Duramax, and Cummins. Towards the end, you will have a clear picture of which one to select. Let’s begin!

Powerstroke vs Duramax vs Cummins 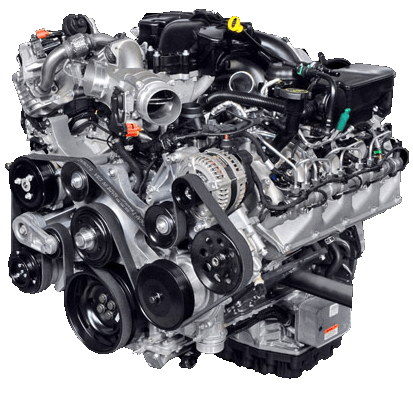 The Power Stroke engine is a product of fierce competition between General Motors and Ford. The latter came up with a 7.3 L Power Stroke Engine that was more powerful than what the world had seen until that point. It was a turning point in the world of engines.

Soon after this, different types came out in the same category because all manufacturers needed to remember emission guidelines before making any innovations. 6.0L, 6.4L, and 6.7L came one after the other. The 6.7L is the one to keep an eye on today. It has a single turbocharger and is quite lightweight while being extremely strong. It is compatible with B20 Diesel and comes with rocker arms valve operation. It also has an inverse-flow configuration.

When General Motors came together with Isuzu, the Duramax Diesel Engines took birth. The first model came in 2001 and had the edge over Power Stroke in that the latter did not have a high-pressure rail injection pump.

The Cummins Engine has been around for the longest. The first engine came in the year 1935 when Cummings himself decided to upgrade his vehicle. He drove all the way from New York to Los Angeles with his updated engine and was proud to report that it was highly fuel efficient and affordable.

Today, the world is scuffling around for the 6.7L Cummings Engine, which has an inline 6-cylinder body with 16:2:1 compression ratio. It also has a variable geometry turbocharger from and high boost pressure. Like the others on this list, it is also B20 biodiesel compatible.

All the enlisted engines are reliable but what’s best for one person may not be the right choice for you. You need to assess your requirements and then make a choice accordingly. For example, if horsepower is your priority, Power Stroke beats the rest. Regular specs such as fuel system and fuel are more or less the same. The biggest difference comes in the following:

This is all you need to know to make an informed choice. So, what are you waiting for? Assess your needs and choose the best for your vehicle. All the best!